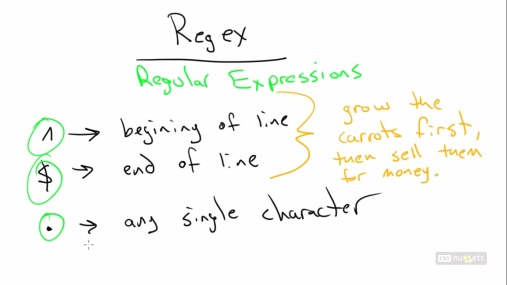 Regular expressions (Regexp)is one of the advanced concept we require to write efficient shell scripts and for effective system administration. Basically regular expressions are divided in to 3 types for better understanding.

Some FAQ’s before starting Regular expressions

What is a Regular expression?

A regular expression is a concept of matching a pattern in a given string.

^ –Caret/Power symbol to match a starting at the beginning of line.

$ –To match end of the line

* –0 or more occurrence of previous character.

. –To match any character

[^char] –negate of occurrence of a character set

Lets start with our Regexp with examples, so that we can understand it better.

Example 1: Find all the files in a given directory

As you are aware that the first character in ls -l output, – is for regular files and d for directories in a given folder. Let us see what ^- indicates. The ^ symbol is for matching line starting, ^- indicates what ever lines starts with -, just display them. Which indicates a regular file in Linux/Unix.

How about character files and block files?

How about finding lines in a file which starts with ‘abc’

We can have number of examples with this ^ option.

Example 2: Match all the files which ends with sh

As $ indicates end of the line, the above command will list all the files whose names end with sh.

how about finding lines in a file which ends with dead

How about finding empty lines in a file?

Example 3: Match all files which have a word twt, twet, tweet etc in the file name.

How about searching for apple word which was spelled wrong in a given file where apple is misspelled as ale, aple, appple, apppple, apppppple etc. To find all patterns

Readers should observe that the above pattern will match even ale word as * indicates 0 or more of previous character occurrence.

Example 4: Filter a file which contains any single character between t and t in a file name.

How about finding all the file names which starts with a and end with x using regular expressions?

The above .* indicates any number of characters

Note: .* in this combination . indicates any character and it repeated(*) 0 or more number of times.
Suppose you have files as..
awx
awex
aweex
awasdfx
a35dfetrx
etc.. it will find all the files/folders which start with a and ends with x in our example.

Example 5: Find all the files which contains a number in the file name between a and x

So where ever it finds a number it will try to match that number.

Some of the range operator examples for  you.

You just have to think what you want match and keep those character in the braces/Brackets.

Example6: Match all the file names except a or b or c in its filenames

This will give output all the file names except files which contain a or b or c.

Example7: Search for a word abc, for example I should not get abcxyz or readabc in my output.

Example 8: Find files which contain [ in its name, as [ is a special charter we have to escape it

Note: If you observe [] is used to negate the meaning of [ regular expressions, so if you want to find any specail char keep them in [] so that it will not be treated as special char.

Note: No need to use -E to use these regular expressions with grep. We have egrep and fgrep which are equal to “grep -E”. I suggest you just concentrate on grep to complete your work, don’t go for other commands if grep is there to resolve your issues.