Radio frequency (RF) is a rate of oscillation in the range of around 3 kHz to 300 GHz, which corresponds to the frequency of radio waves, and the alternating currents which carry radio signals. RF usually refers to electrical rather than mechanical oscillations; however, mechanical RF systems do exist (see mechanical filter and RF MEMS).

Although radio frequency is a rate of oscillation, the term “radio frequency” or its abbreviation “RF” are also used as a synonym for radio – i.e. to describe the use of wireless communication, as opposed to communication via electric wires

The industrial, scientific and medical (ISM) radio bands are radio bands (portions of the radio spectrum) reserved internationally for the use of radio frequency (RF) energy for industrial, scientific and medical purposes other than telecommunications.[1] Examples of applications in these bands include radio-frequency process heating, microwave ovens, and medical diathermymachines. The powerful emissions of these devices can create electromagnetic interference and disrupt radio communication using the same frequency, so these devices were limited to certain bands of frequencies.

Radio spectrum refers to the part of the electromagnetic spectrum corresponding to radio frequencies – that is, frequencies lower than around 300 GHz (or, equivalently, wavelengths longer than about 1 mm). Electromagnetic waves in this frequency range, called radio waves, are used forradio communication and various other applications, such as heating. The generation of radio waves is strictly regulated by the government in most countries, coordinated by an international standards body called the International Telecommunications Union (ITU). Different parts of the radio spectrum are allocated for different radio transmission technologies and applications. In some cases, parts of the radio spectrum is sold or licensed to operators of private radio transmission services (for example, cellular telephone operators or broadcast television stations). Ranges of allocated frequencies are often referred to by their provisioned use (for example, cellular spectrum or television spectrum).

1HZ (one cycle per second)

Frequency (number of cycles per second)

In an IEEE 802.11 system, RSSI (Received Signal Strength Indicator) is the relative received signal strength in a wireless environment, in arbitrary units. RSSI is an indication of the power level being received by the antenna. Therefore, the higher the RSSI number, the stronger the signal.

(shows up in -ve values, so higher the value, closer it is to zero and thus stronger the signal)

In telecommunication, free-space path loss (FSPL) is the loss in signal strength of an electromagnetic wave that would result from a line-of-sight path through free space (usually air), with no obstacles nearby to cause reflection or diffraction. It does not include factors such as the gain of the antennas used at the transmitter and receiver, nor any loss associated with hardware imperfections

You can easily determine the quality of your wireless signal where your computer is situated in relation to your Wi-Fi router.In OS X, simply launch System Information (/Applications/Utilities or Apple Logo > About This Mac > More info… > System Report…).In the left pane, you’ll find the Network section, and under that is Wi-Fi. Take note of Signal / Noise ratio.Here’s how mine looks. 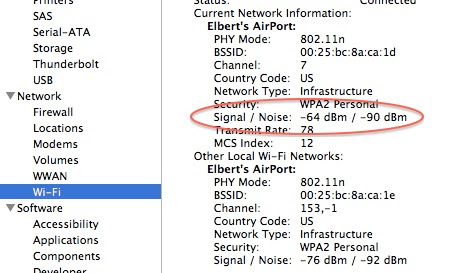 Note: you can use the command + R keys to refresh the reading.

To determine the SNR value in dB, simply subtract the higher Signal value from the lower Noise value.

From there, you can refer to this chart, which I found in the Apple Discussion forums:

If you find that your computer is registering poor signals, you can either relocate, the computer, or the Wi-Fi router, or go into the admin panel of the router and try different channels on a trial-and-error basis.